Please Wait...
Home "In the chaos of 'Jethalal', 'Taarak Mehta' is in danger of losing his job

"In the chaos of 'Jethalal', 'Taarak Mehta' is in danger of losing his job

In 'Taarak Mehta Ka Ooltah Chashmah', Taarak Mehta's troubles are not taking the name of reducing. Taarak Mehta had to stumble door to door because of a shirt. 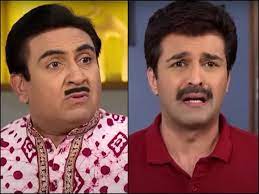 Taarak Mehta's job in the TV show 'Taarak Mehta Ka Ooltah Chashmah' is in danger. Earlier, he found it difficult to criticize his boss with Jethalal and now he has to stumble every now and then because of his shirt. In the recent episode, Taarak Mehta was talking badly about the boss on the phone with Jethalal. His boss overhears these things and threatens to remove Taarak Mehta from his job. However, this does not happen.

Taarak Mehta's boss gets a call from a client who is interested in a deal worth Rs 25 crore. The boss says that if Taarak Mehta closes the deal of 25 crores, then he will be sent on a Europe trip for free along with his wife. It was a matter of happiness for Taarak Mehta. One, the job is saved and on top of that, if the deal is done, the trip to Europe will also be available for free. He comes home and tells this news to his wife and cannot contain her happiness. Taarak Mehta presses his yellow shirt for the morning meeting. Meanwhile, his best friend Jethalal comes.

Taarak Mehta made a big mistake in Jethalal's affair

Taarak Mehta shares all his things with Jethalal and Jethalal sweetens his mouth by feeding him, sweets. When Jethalal goes back to his house, Taarak comes back to press his shirt, but by then his shirt work is done. When the shirt gets burnt, Taarak Mehta asks his neighbors for yellow shirts. He has to go to the office in a yellow shirt only.

First Taarak Mehta goes to Popatlal. When Taarak asks Popat whether his yellow shirt is a woman, then Popat narrates his grief and says that he does not have a woman, but he does make all his clothes feminine. When Taarak tries her yellow shirt, it turns out to be big. Then Taarak Mehta goes to Atmaram Bhide and tries his shirt. He becomes happy at first, but then he comes to know that his shirt is torn from behind. Seeing this, his and Taarak Mehta's parrots fly away.

Will Taarak Mehta's work be completed?