Please Wait...
Home Nani 30 First Look: After 'Sita Ramam', Mrunal Thakur will be seen in 'Nani 30', the first look of the film surfaced

Nani 30 First Look: After 'Sita Ramam', Mrunal Thakur will be seen in 'Nani 30', the first look of the film surfaced

Mrunal Thakur Work With Nani: Actress Mrunal Thakur is going to be seen in Nani 30. The first look of the film has also been released. This is Mrunal's second film in the South. 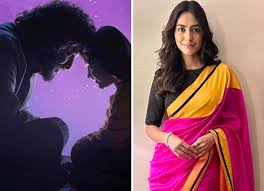 Actress Mrunal Thakur's career is going great these days. The year 2022 proved to be very good for the actress in terms of work. Now the news is coming that another big film has been bagged by the actress. If reports are to be believed then Mrunal Thakur is going to be seen in Nani 30. The first look of the film has also been released.

Nani's 30th Telugu film is directed by debutant director Sooryav. The film is produced by Mohan Cherukuri (CVM), Dr. Vijender Reddy Tegla, and Murthy K.S. Done. The music of this film is composed by Malayalam composer Hesham Abdul Wahab. He composed the music for Hridayam, which was a blockbuster.

Looking at the glimpse released, the film seems to be an emotional family drama. The image of Nani with a young girl showed that the film could revolve around a father-daughter relationship. The film has not yet come on the floor.

Nani had two films in 2022
Nani had two films released last year, the first Sundarniki, for which she received appreciation, and Hit: The Second Case, where she played a cameo. He also produced HIT2. Nani's upcoming films include 'Dussehra', where she is paired opposite Keerthy Suresh. Tollywood actors prefer to work with debutant directors and both Dussehra and Nani 30 are being directed by debutant directors.

Mrunal has many films
Mrunal Thakur has many Hindi films in 2023. One is with Aditya Roy Kapur, called Gumrah, which is the official remake of the hit Tamil film 'Thadam'. The actress is playing the role of a cop in the film and she said that she is very excited about the role. In an interview, she said that she waited eight years to see big success and to be declared a star. Mrunal said the key to her success was that she waited for the right roles and the right time.