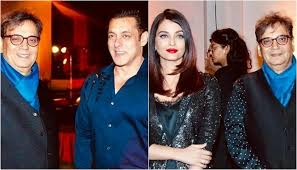 Luv Sinha shared an unseen picture of Subhash Ghai's birthday
Salman Khan looks dapper as he poses with Subhash, Shatrughan, Poonam, and a few others in pictures from Subhash Ghai's birthday bash shared by Luv Sinha. In a picture, actress Aishwarya Rai is seen standing with Abhishek Bachchan, and Jackie Shroff during the cake-cutting ceremony. Everyone is smiling while posing for the camera. At the same time, the fans are liking these pictures a lot.

Salman Khan looks dapper
In the unseen pictures, Salman was dressed in a black T-shirt with maroon pants and a brown jacket, while Shatrughan Sinha was seen in a black coat and pants with a blue T-shirt. While his wife Poonam appeared in a black ethnic suit. Luv wore an off-white shirt with denim, while birthday boy Subhash wore a black coat and pants with a white turban. Everyone gave a smile while posing for the camera.

Love wrote a lovely post along with sharing the pictures
Sharing the pictures on Instagram, Luv wrote, 'Happy birthday @subhashghai1 mama. You only get younger with every year. Your journey through life and your legacy as a great filmmaker will always inspire us. Thank you for all the unforgettable memories and stories you captured on celluloid. He used 'Legends', 'Happy Birthday', 'The Show Man', 'Memories' and 'Family' as hashtags.

Subhash Ghai has made many great films
Please tell that Subhash Ghai has written, produced and directed many films like Kalicharan, Vishwanath, Karj, Hero, Vidhata, Meri Jung, Karma, Ram Lakhan, Saudagar, Khalnayak, Pardes and Taal in the 80s and 90s. His films have proved to be blockbusters at the box office.