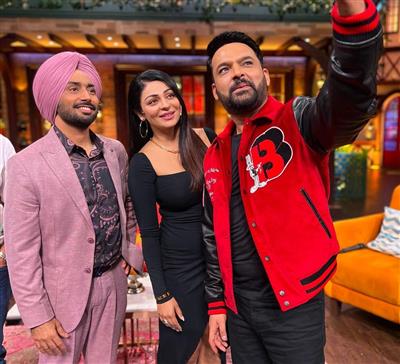 There is an influx of celebrities every week in the comedy show aired on Sony TV. Sometimes Bollywood stars come to promote their films, and sometimes a group of famous comedians, singers, and motivational speakers are seen. This week the stars of the Punjabi film 'Kali Jota' will be seen in the show. Neeru Bajwa, Satinder Sartaj, and Vijay Kumar Arora will come to the show.

The latest promo of the show has been shared on the Twitter handle. It can be seen in the video that as soon as Neeru Bajwa enters the show, host Kapil Sharma starts flirting with her. Kapil welcomes Neeru to the show. He says you are coming to the show for the first time. On this Neeru says that she never called him before. On this Kapil says, "I did not know that you come when called."

After this Kapil Sharma says, "Some time ago a film of Neeru came, in which he said that love can happen at any age and with anyone." After this, while hitting the comedian Neeru Bajwa, he says, "You believe in love after marriage." During this, Neeru was looking very beautiful in a black color midi dress.